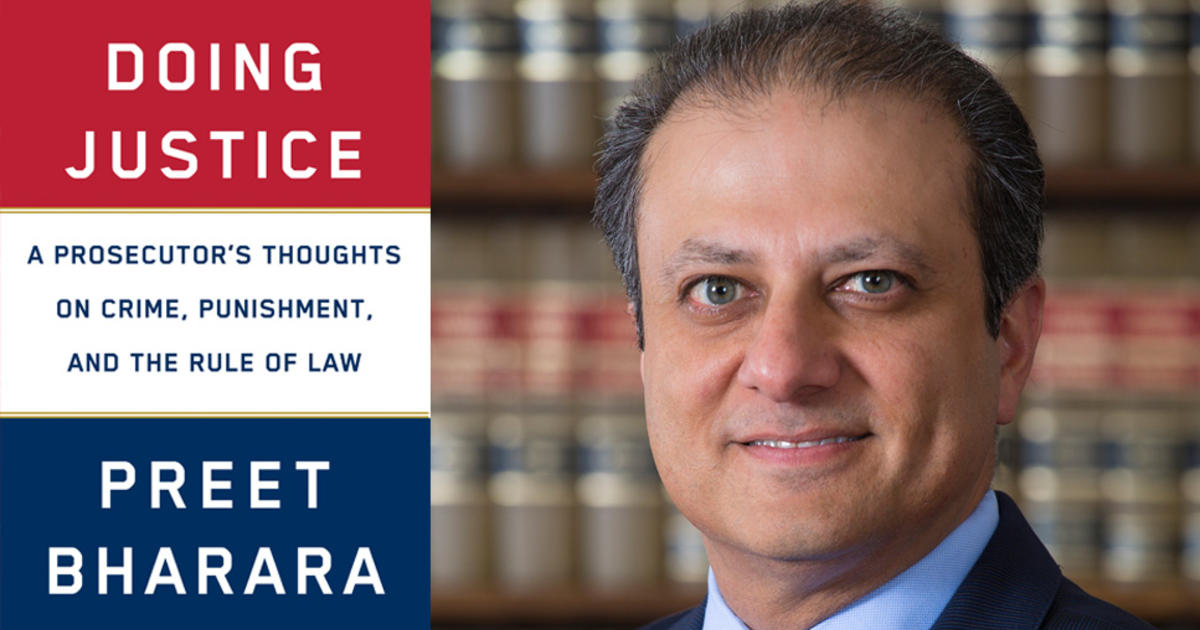 “What we have is a system too often marred by men and women who come to justice with a closed mind, with inaccurate preconceptions, with bias, with self-interest. With a belief that the system is something to beat, to circumvent, rather than as a way to reach the truth.”

It is with this undissembling assessment of the criminal justice system that Preet Bharara, a former US Attorney, introduces readers to his book ‘Doing Justice: A Prosecutor’s Thoughts on Crime, Punishment and the Rule of Law’. Bharara, who served as the US Attorney for the Southern District of New York for 8 years, investigated and prosecuted a variety of cases which include espionage, terrorism, homicide, and financial crimes.

Laced with stories of bias, error, compassion, and ruthlessness, the book gives readers a tour of the workings of the criminal justice system. Though the stories primarily emerge from the United States and its institutions, Bharara’s views on prosecutorial independence, due process, and punishment are highly relevant to India.

The truth is elusive

Part I of the book which consists of 10 chapters is dedicated to the nuances of inquiry and investigation. Unlike in India, where prosecutors do not play an active role in the investigation of a crime, prosecutors in the US interrogate the accused, collect evidence, and officially file criminal charges before the courts.

Bharara vehemently underscores the need for investigators to have a sense of justice, fallibility, and a profound sense of responsibility as their errors and biases can destroy lives. An entire chapter has been dedicated to explain the problem of bias and how it can set the course for a disastrous investigation. This chapter narrates the story of Brandon Mayfield, a resident of the US who was accused of bombing trains in Spain. After the bombing, the Spanish investigators had sent digital images of the fingerprints collected at the crime scene to the FBI’s lab at Quantico. The FBI ran these images against a database which had more than 44 million fingerprints. Eventually, 3 analysts concluded that the fingerprints were those of Mayfield, a lawyer who had served in the US Army. Though there was no proof that he had ever travelled to Spain, he was detained. While the FBI struggled to find corroborative evidence, their suspicion intensified when they learnt that Mayfield was married to a Muslim from Egypt and had converted to Islam. Furthermore, he had represented a terrorist in child custody proceedings.

Eventually, the Spanish National Police informed the FBI that their investigation revealed that the fingerprints were those of an Algerian national who had participated in the bombing. Mayfield was released and the FBI paid a compensation of $2 million. Bharara opines that the information about Mayfield’s wife, his religion and work history generated latent bias in the minds of the investigators. Though there was no malice, bias nudged them to treat the information as corroboration as opposed to mere coincidence.

There are crucial lessons for the Indian state in this story. Its ambitious plan to store biometric details of arrestees and convicts for 75 years can have a deleterious impact on due process if the problems of bias and fallibility of forensic science are not acknowledged. There is evidence that suggests that the police in India are biased against Muslims and certain marginalised groups. Disproportionate representation of members of these groups in criminal databases coupled with bias can make these groups vulnerable to miscarriage of justice and harassment.

With his vast experience of interrogating suspects and working with astute detectives, Bharara explains that brutality and barbarism are not necessary for successful interrogations. ‘Principles of Interrogation’ is perhaps the most enthralling chapter of the book. In it, he stresses that patience and humanity outperform brute force. Using various anecdotes, Bharara drives home the point that a successful investigator collects information about a suspect beforehand, develops a rapport with the suspect, and uses emotional intelligence to convince him to narrate his version of events. Bharara explains that a lot of hardened criminals, including terrorists, want their stories to be told and known as they generally have a ‘deep desire’ to be understood.

Apart from explaining why torture is inherently wrong and unnecessary, Bharara draws attention to the tragic reality of false confessions due to torture. His word of caution is germane to India where police officers readily resort to custodial torture. Reports suggest that barbaric forms of torture are primarily used to obtain confessions and trace stolen property. While police officers guilty of inflicting torture ought to be punished, it is equally important to make them realise that torture is unnecessary for effective investigation.

Bharara’s emphatic explanation of prosecutorial ethics and independence makes the book a must read for prosecutors and lawyers who represent the state against citizens. He believes that the decision to charge a person must not be based merely on the likelihood of success. What matters the most is the ‘fairness of making a charge’. A prosecutor must genuinely believe that the accused is guilty. In his words, “Even if you have a winnable case but you have a legitimate qualm about guilt, you cannot proceed.” He notes with disappointment that the market rewards aggressiveness and aggressive prosecutors are the most sought after by the private sector as they are perceived as talented lawyers.

Bharara points out that prosecutorial discretion is a ‘bulwark against over-criminalization’ and that it can be wisely used to prevent broad and hastily enacted criminal statutes from disproportionally affecting certain communities.  In India, prosecutors are often tasked with opposing bail pleas. How often does one read about a prosecutor not opposing a bail plea pursuant to an independent assessment? As a result, there are several instances of old and sick persons being detained merely because the investigative agency insists on pre-trial detention. Furthermore, though the Code of Criminal Procedure, 1973 empowers prosecutors to withdraw from prosecuting a case, this power is mostly used at the behest of the government to whimsically shield certain people from prosecution.

Justice: What’s the right thing to do?

This book contains stimulating material for a course on law and justice. Apart from helping readers appreciate the vital role of prosecutors in the criminal justice system, Bharara does what philosopher Michael Sandel once did- compel people to reflect on ‘justice: what’s the right thing to do?’

Rahul Machaiah is a guest blog writer for Vidhi.