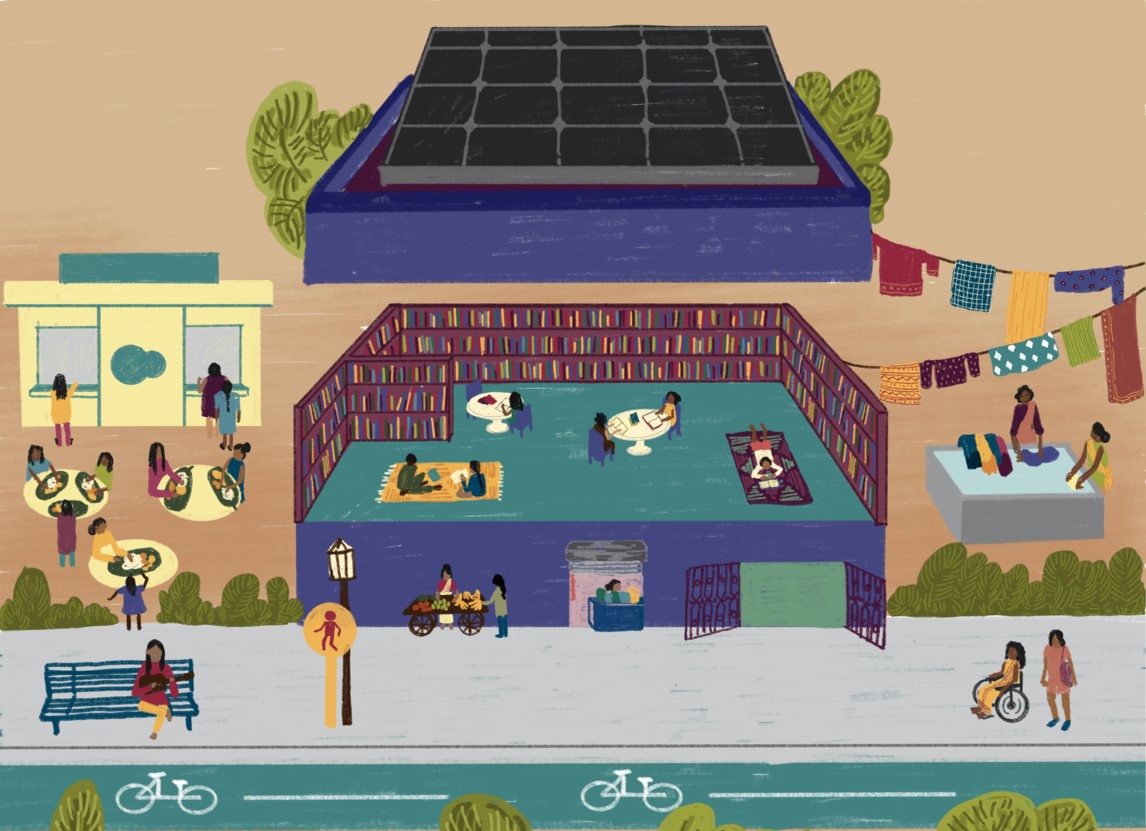 Making a Feminist City – Planning Safety and Autonomy for Women

Summary: This report fills a key gap in urban planning and municipal governance literature in India by recommending feminist urban planning as an approach to build safer and thereby, more equitable cities for girls and women.

While there are different attempts being undertaken by various governments to address women’s safety in cities, not many seem to be focusing on the site of such violence itself – urban space and how it is being produced. In our cities, girls, women, gender and sexual minorities face violence not only in their homes and in relationships, but also in public space as a direct consequence of poor urban design and planning. The lack of safety in urban spaces manifests as a denial of access to basic rights for women in cities.

This report focuses on the spatial dimensions of safety, in examining how laws and policies affecting urban space can be modified or amended to create safe and equitable cities. The provision of gender sensitive public infrastructure and services necessary for the production of safety and autonomy in urban space will enable social and economic development of women, girls, sexual and gender minorities. The way to realise this is to engage with feminist geography, with the recommendation to adopt feminist urban planning as an approach to realise this goal.

The report examines literature on how women use and navigate the city differently, engages with what safety for women in cities means in material ways, and looks at the ways in which existing urban space is hostile to women. It makes a case for adopting feminist urban planning as an approach to creating safer and more equitable cities, making a specific set of recommendations to facilitate the same.

How Do Women Use the City?

The mobility patterns of a person engaged in paid labour along with undertaking domestic activities and caring for dependents such as children or an older family member is more complex. Called ‘trip-chaining,’ it is a series of short trips linked together between main or primary destinations. Gender roles significantly determine how people traverse urban space and understanding these differences is critical to make gender responsive planning and policy decisions. Research indicates that women in the city rely on non-motorised transport such as walking at higher rates as compared to men, which requires well maintained footpaths, and well-lit streets at all times. In addition to walking, women also tend to be highly dependent on public transport especially buses, which makes a robust, well-connected, free or low-cost public transport critical for women’s mobility.

Approaches rooted in criminal law for tackling violence against women are limited to addressing instances of violence ex post facto. Conditions that render women vulnerable to different forms of exclusions and violence in the city are exacerbated by gender-insensitive urban infrastructure that is not designed for women’s bodies and is non-responsive to their needs. The spatial segregation of public and private spaces leads to gendered discrimination in access to public space, which for women is conditional and tied to appearing ‘respectable’ to manage socio-cultural perceptions. Sexual orientation consistently ranks as the third-highest motivator for hate crime incidents around the world, and transgender people were found to be almost twice as likely to be harassed in public places, with studies finding that in India, the main perpetrators of violence against transgender people were police and law-enforcement. When urban design and policymaking does not take into account the needs of the care economy, it ensures that women with children or dependents are disempowered from leaving violent domestic situations, due to the lack of viable and safe alternatives.

The feminist articulation for the construction of public space extends far beyond mere safety. Claims to urban space have to be located in an understanding of fundamental freedoms and rights in a constitutional framework as opposed to a limited paternalistic claim for safety and protection.

Urban planning and infrastructure design have largely been gender blind with a limited understanding of the interrelationships between gender, socio-economic inequities and violence. All women do not experience the city in the same vein. The differences in class, caste, gender, religion, sexuality, age, disability, marital status among others often result in myriad forms of exclusion and discrimination in the city. A feminist approach considers the multiplicity of differences and is sensitive to how they intersect with gender to disproportionately affect some people more than others, in their access to, and autonomy in the city.

The built environment is made in accordance with a set of ideas about how society works. If planning assumptions are based on outmoded social norms rooted in paternalistic gender roles, it results in exclusionary and hostile cities. However, by adopting a feminist urban planning approach which centres women at the core of city planning and design, one can not only build cities that are inclusive, but also challenge entrenched social norms about women and their role in the city, transforming social relations in the process. It is essential that the needs of everyday life, safety, comfort, convenience and accessibility to cities are made an integral part of city design.

a) Compact, Diverse, Mixed Use Neighbourhoods

Women’s Right to the City and Right to Public Space

It is important to note that a Feminist Urban Planning approach is first and foremost perspective-oriented and requires reconfiguration of development priorities and planning imperatives to focus on girls, women, gender and sexual minorities. From an analysis of the constitutional scheme and legal framework governing urban planning in India, the following recommendations have been made to ensure that urban planning is people-led and women’s participation is made integral to that process.

Article 243W must be amended to provide that State Legislatures ‘shall’ by law, mandatorily vest Municipalities with such powers and authority necessary to enable them to function as institutions of local self-government. This is critical to ensure that municipalities are not subject to the State Government’s control and to enable them to fulfil their constitutional mandate.

The Architects Act, 1972 needs to be amended to ensure that the Council of Architecture has representation of women, persons from gender and sexual minorities. Changes also need to be made to regulations governing architectural and planning education to include courses exploring gender inequality and the built environment, feminist urbanism, feminist design and planning methods, among others.

Planning laws must be amended to require representation of women and, particularly those belonging to SC and ST communities in the Planning Authority. Feminist approaches including emphasis on participatory planning and planning tools such as gender and safety audits, surveys for collection of gender disaggregated data must be incorporated as an integral part of the master planning exercise. All aspects of municipal governance including urban planning must be a function of municipalities. Ward committees, with diverse representation, need to be institutionally empowered with necessary functional autonomy and financial powers, ensuring that they can play an integral role in local planning contexts.

An office dedicated to Women, Gender and Sexual Minorities’ affairs must be created and endowed with resources at the municipal level to ensure that there is sustained service delivery, capacity-building and expertise on subjects relating to women, gender and sexual minorities in the city. It can develop expertise in feminist urban planning approaches and provide inputs on planning, legislation as well as provide training or advise institutions and departments at the city level.

The illustrations in the report were made by Drishti Khokhar