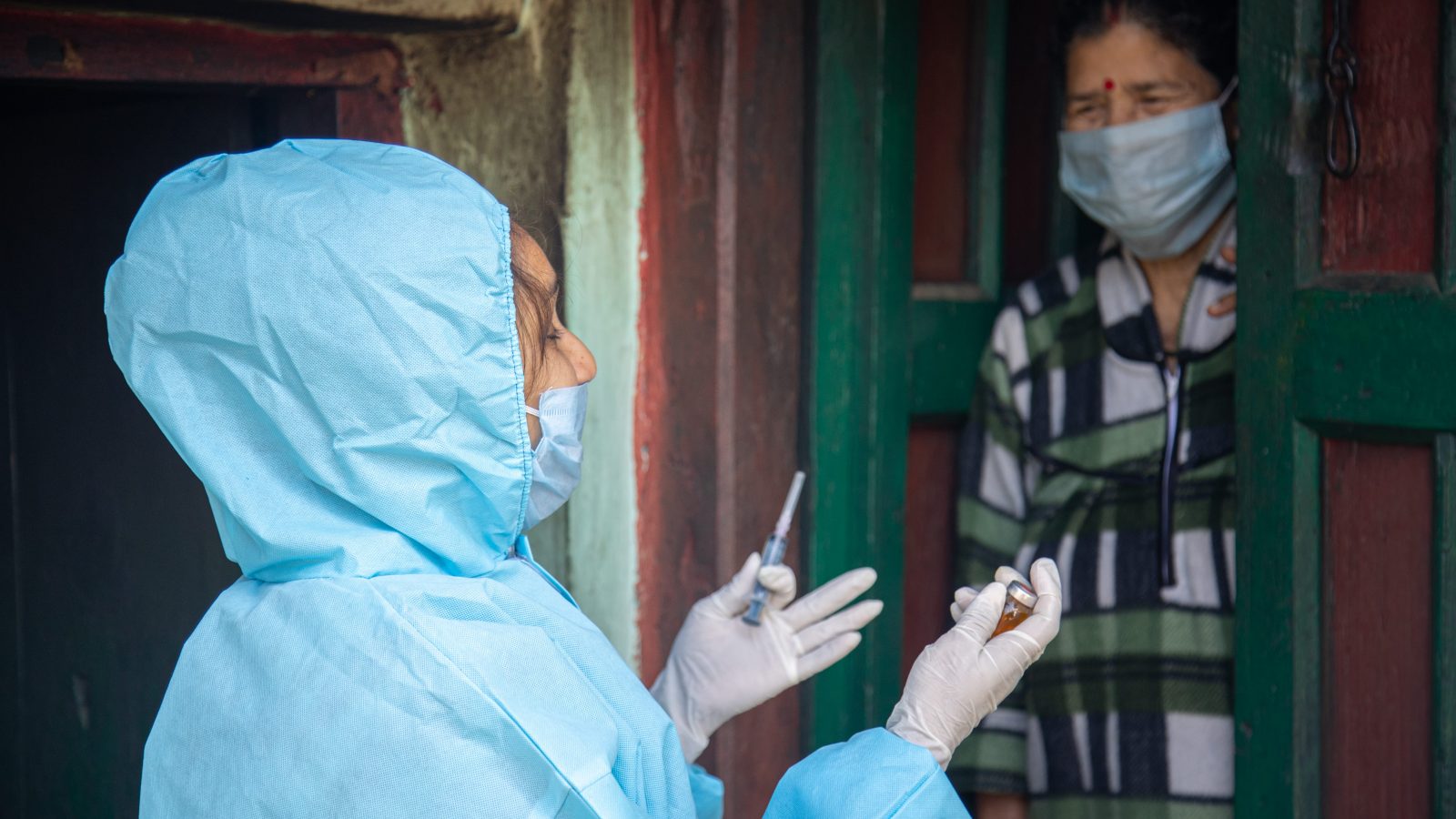 An Analysis of the Current Status and Legal Challenges

After a deadly second wave of COVID-19 this year, efforts towards vaccination of eligible population in India have been increased fighting several roadblocks including vaccine shortage, logistics, and hesitancy of the general public towards vaccination.

Bhubaneshwar has recently claimed to be the first city to achieve 100 percent vaccination of its eligible population. Other states are desperately making moves to achieve their vaccination targets. As a result, many local authorities and district administrations are resorting to forceful or coercive vaccination, even though the Central government has made it explicitly clear that vaccination is completely voluntary.

The Supreme Court recently issued a notice to the Central Government in a plea against coercive vaccination, where the petitioner has argued that coercing people to take the vaccines for fear of losing their jobs or access to essential services is a violation of their fundamental rights. Many High Courts have also taken up individual cases of coercive vaccination on the cost of restricting income or livelihood.

As coercive vaccination can be carried out in many ways, in this blog, we aim to explore how it is being done in different states in India currently, and what its legal challenges are.

How is Coercive Vaccination against COVID-19 being carried out in India?

Some common themes that occur from coercive vaccination orders across states are:

These orders make vaccination compulsory indirectly despite the Central government’s stand on voluntary vaccination. Let’s take a look at the legality of these forms of coercive vaccination, especially those restricting essential services and livelihoods of people.

In India, there are no specific legal provisions to allow mandatory vaccination. The Constitution directs the State to protect the public health of citizens under Article 47. Further, the Epidemic Diseases Act, 1897 and the Disaster Management Act, 2005 give broad powers to the government to take any steps to control an epidemic, which include inoculation. However, such coercive vaccination orders are not immuned by the following legal challenges:

The orders imposing mandatory vaccination do not give a rational choice to an individual to take a vaccine. This violates their right to decisional autonomy and self-determination as articulated in KS Puttaswamy vs. Union of India. The Supreme Court in Puttaswamy recognised that the right to privacy not only includes a person’s rights relatable to her physical body but also protects an individual’s autonomy over fundamental personal choices.

While refusing the vaccine falls within the scope of the right to privacy, the Madras High Court had doubted whether it could be exercised in the interest of public health. To determine the restrictions that might be placed on this right in the public interest, the questions of legal validity of such restrictions and proportionality with respect to their objective will also have to be looked at in addition to a legitimate aim.

By linking vaccinations to essential services, these orders have a chilling effect on the right to life, right to livelihood and the right to carry on any trade, profession or business. Many High Courts have recently dealt with this issue in individual cases concerning COVID-19 vaccination. For instance, the Meghalaya High Court recently observed that the state government’s order that made vaccination compulsory for shopkeepers, local vendors, taxi drivers, etc. are violative of the right to livelihood and the right to practice a trade. The court further stated that vaccination cannot be mandatory especially when there exists no reasonable nexus between vaccination and prohibition of the continuance of occupation and/or profession in the present case.

The Gauhati High Court relied on the Meghalaya High Court’s order declaring the Standard Operating Procedure (SoP) issued by the State of Mizoram restricting unvaccinated people from leaving houses, opening/managing shops, or operating public transport as arbitrary and not in consonance with the provisions of Articles 14,19 & 21 of the Indian Constitution.

The Manipur High Court also recently observed that orders denying people their livelihood vis-a-vis vaccination status would be illegal on part of the State, if not unconstitutional.

The Nagaland bench of the Gauhati High Court had also directed the State to modify an SoP regarding mandatory vaccination of teaching and non-teaching staff as a precondition to opening schools and colleges on the ground that vaccination cannot be made compulsory.

As seen above, in most such cases, the Courts believe that coercive vaccination orders which violate the fundamental rights of people are invalid.

The Supreme Court in Puttaswamy held that there is a three-fold requirement for the breach of personal liberty. They are the existence of a valid law, a legitimate state aim, and proportionality.

The orders concerning coercive vaccination can qualify for legitimate state aim as they have a larger public health interest. However, these orders do not qualify for the other two requirements.

Absence of a valid law

In the current situation, coercive vaccination restricting the fundamental rights of people is being carried out through executive orders by state or local governments. This poses the question: Can these executive orders be qualified as valid law in the present context? The Gauhati High Court, while striking down the Mizoram government’s SoP discussed above, observed that given the prevailing conditions, the fundamental right to practise any profession, or to carry on any occupation, trade or business under Article 19(6) can be restricted by law and not by way of an executive instruction.

Going by the three-fold requirement laid down in Puttaswamy, the restriction should be proportionate to the purpose it seeks to achieve. However, state actions to vaccinate people in this manner are disproportionate as the benefits of vaccination cannot be justified to deprive people of their food and livelihood.

While the purpose of coercive vaccination is in the larger public interest, it cannot be continued in this form as it is not being done proportionately under a valid law.

The orders of forced vaccination come at a time when the vaccine shortage is still prevalent in the country, especially in remote and rural areas. In this situation, penalising individuals by cutting their rations and salaries goes against the principle of equity as it is not fully accessible. In the Mizoram SoP case, the Gauhati High Court observed that the unvaccinated citizens of the State cannot be faulted due to the States’ failure in not completing the vaccination of the targeted population.

Thus, forceful or mandatory vaccination that is being carried out in India in the given circumstances goes against the principle of equity and does not find any force in law.

While vaccination is necessary to ward off COVID-19 in the long run, it should be carried out as an obligation on part of the state and not by adopting authoritative means. In most cases, the government’s failure in achieving vaccine targets is due to the lack of access and availability of vaccines and some extent, vaccine hesitancy.

The government needs to work towards not only ensuring access to vaccines but also spreading awareness about the pros and cons of vaccines, and building trust by making the vaccines approval process transparent.

This points towards the larger gap of a holistic rights-based public health emergency law in India. These orders and challenges might not have arisen had India possessed a statutorily backed, principled, and rights-based approach that would have guided authorities on how mandatory vaccination ought to have been rolled out if needed. A rights-based public health emergency law would impose duties on the government and ensure better accountability instead of just broad powers that the current legal framework facilitates. Coercive means and unchecked power will only lead to uninformed consent and more mistrust among people.

This blog is the first in the series that will continue to explore ways in which the lack of a rights-based public health emergency law hampers our efforts against the pandemic.

Shreya is a Research Fellow working in the area of Health and Education. She is currently working on research projects related to public health, patient rights and inclusive education. Her areas of interest include Public Health, Right to Education, Constitutional law, Cyber law, and the intersection of Health and Technology. Shreya graduated with a B.A. LL.B. (Hons.) from Hidayatullah National Law University, Raipur in 2018. She has been published in newspapers and websites like The Hindu and The Wire. She has co-authored the Centre for Civil Society’s ‘Compendium of laws to be repealed in Chhattisgarh’. In collaboration with the Centre for Communication Governance (CCG), she submitted an academic paper to MEITY on ‘Non-Consensual Obscene Content and Indian Law’. Prior to joining Vidhi, she has interned with policy organisations like CCG and the Land Rights Initiative at the Centre for Policy Research, in the Chambers of Senior Advocate Prashant Bhushan, and with law firms like Karanjawala & Co and Samvaad Partners.