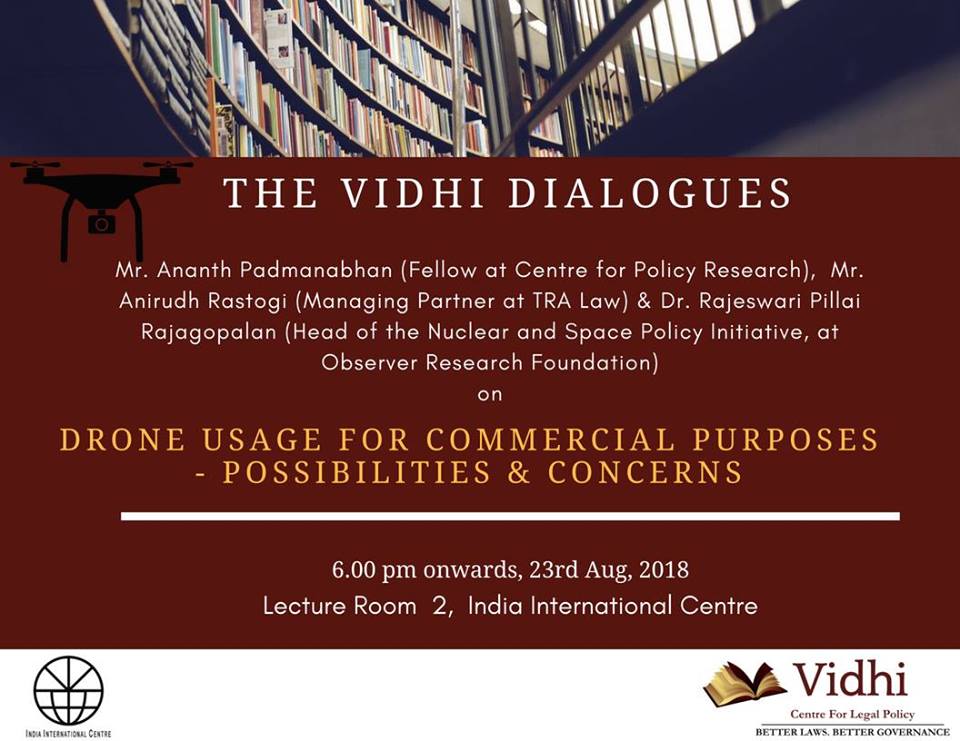 The rapid influx and use of drones have raised several legal and policy challenges. To address the same, the DGCA, in 2014, prohibited the use of drones in India for civil purposes. Drones can be purchased online in India but the ban on their civilian use has been in place for more than three years. Many argue that the ban on the use of drones is not only undesirable, it is also impractical as the widespread use of drones continues. Whereas others argue about the potential security risks, privacy violations, and the possible employment loss. In this dialogue, we aim to understand the possibilities and potential risks of drone usage and if the blanket ban should be re-assessed.

In this dialogue, we aim to understand the possibilities and potential risks of drone usage and if the blanket ban should be re-assessed.

Brief introduction to the panelists:

Mr. Ananth Padmanabhan is a Fellow at Centre for Policy Research, based in New Delhi. His primary research focus is technology, regulation, and public policy, and the intersection of these three fields within the Indian context. Previously, Mr. Padmanabhan practiced law in the Madras High Court, and taught at various institutions, including the National Law University, Jodhpur, and the National Law School of India University, Bangalore. He holds a master’s degree in law from the University of Pennsylvania Law School and is currently enrolled in the school’s doctoral program on a nonresident basis.

Mr. Anirudh Rastogi is the Managing Partner ar TRA Law. Anirudh specializes in general corporate legal practice encompassing foreign investments, mergers and acquisitions, joint ventures, bank financings and other kinds of commercial matters. Anirudh holds a Masters’ degree in law from Harvard, is qualified to practice in the State of New York and India, and is the author of a book on cyber laws.

Dr. Rajeswari Pillai Rajagopalan is a Distinguished Fellow & Head of the Nuclear and Space Policy Initiative, at Observer Research Foundation. Previously, she held stints at the National Security Council Secretariat, where she was an assistant director, and the Institute of Defence Studies and Analyses New Delhi, where she was a research officer. Her areas of research include US foreign and security policy, military strategies of major Asian powers including China, the United States, Japan and Russia, and US missile defence issues.