The Liability Regime for Non-Executive and Independent Directors in India: A Case for Reform

An examination of the current legal framework demonstrates the need to create safeguards for non-executive and independent directors.

Summary: The Report underscores the challenges present in the current legal framework governing the liability of non-executive and independent directors and presents informed recommendations to make the extant regime more efficient.

In the aftermath of recent corporate scams (both in India and globally), the enforcement intensity against directors has increased significantly. While such intensity is necessary for discouraging wrongful conduct, caution must be exercised to ensure that it does not have unintended consequences.

Data indicates that in India, the rate of resignation of independent directors from the boards of listed companies has increased significantly when compared to previous years (see figure below). Given the importance of qualified and upright independent directors for the development of our capital markets, this seems alarming.

Independent directors perform functions that are critical to good corporate governance, but the liability-related risks that such directors face seem disproportionate to their role. Some of these issues are relevant for other categories of non-executive directors as well. 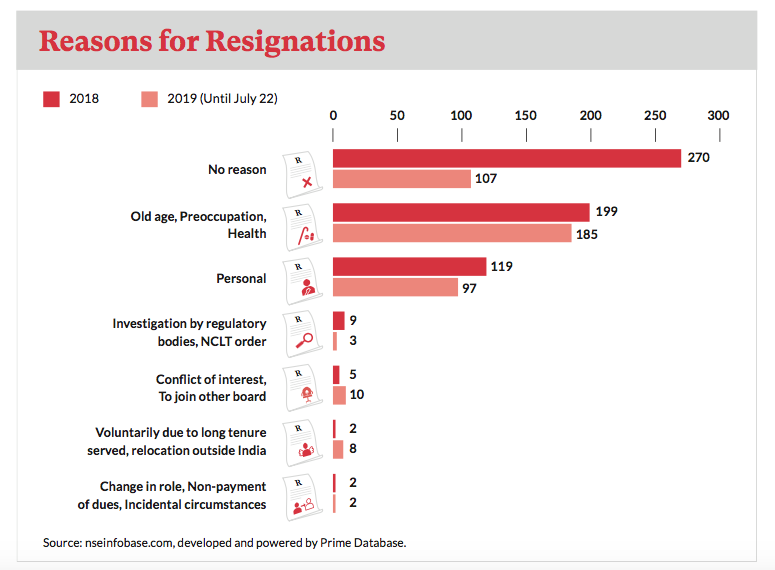 Based on information available on nseinfobase.com, developed and powered by Prime Database (n. 14). Errors in interpreting the data, if any, are ours.

Even though the Companies Act provides for certain safe harbours, specifically for independent and non-executive directors with the objective of limiting their liability, it does not provide any safeguards at the stage where summons are issued to such directors by enforcement/investigating agencies.

To add to the issue, there are a host of other statutes that provide for offences attributable to companies and directors which have no specific safe harbours for independent and non-executive directors. As a result, such directors face significant risks not just in terms of liability but also reputational harm for acts that are beyond their control.

A report published by the Vidhi Centre for Legal Policy ‘The Liability Regime for Non-Executive and Independent Directors in India: A Case for Reform’ underscores the challenges present in the current legal framework governing the liability of non-executive and independent directors and presents informed recommendations.

Challenges in the current legal and regulatory framework

Limitations of safe harbours in Section 149(12) of the Companies Act: Independent directors and non-executive directors may be implicated not only for errors but also for passive negligence.

Lack of safe harbours in other statutes: A range of statutes governing various offences such as money laundering, tax evasion, securities frauds and environmental degradation do not recognise the distinction between executive and non-executive directors in their attribution of liability provisions. They do not provide for any safe harbours for independent and non-executive directors.

Limitations of summoning provisions: In practice, notices are often sent to all directors. However, procedures that require taking into account the difference between notices and summons are not observed. Moreover, the safeguards provided under Section 149(2) of the Companies Act kick in only after investigative/legal proceedings have been initiated, resulting in substantial loss of reputation and harassment and inconvenience caused to independent and non-executive directors.

Fragmented enforcement regime: Multiple investigative/enforcement agencies deal with economic offences and there is no uniformity in procedures followed for conducting investigations and prosecutions.

Harmonise the liability framework for directors across statutes: The liability framework for directors across all statutes recognising corporate offences should be harmonised with the Companies Act. This can be done by providing for the concept of ‘officer who is in default’ and enabling non-executive and independent directors to claim the protections designed specifically for them under the Companies Act.

Issuance of summons: Summons should be issued to independent and non-executive directors only on arriving at the conclusion that there is a prima facie case against them based on a proper examination of the material and evidence on record. For a specified category of independent directors, a requirement may be imposed that they should not be summoned without prior authorisation from the co-ordination committee (referred to above) or a court of appropriate jurisdiction.