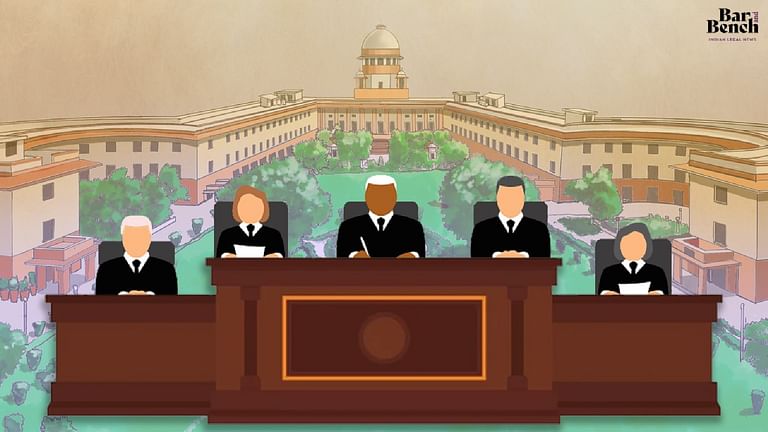 Throughout history, Constitution Benches have shaped our idea of India in immeasurable ways. They have decided on issues that range from the law on personal liberties (Maneka Gandhi v Union of India) to how territorial boundaries of India’s states should be demarcated (In re: Berubari Union).

Unfortunately, even though many such issues are still pending adjudication before the apex court, sufficient benches to resolve these critical questions of law, have simply not been constituted. This article argues for the need of Chief Justices of India to see the merit in disposing these cases on a priority basis.

Pendency before Constitution Benches is uncertain and arguably stagnant

*Wherever available, these numbers are as on 31st December of that year. When not available, the closest month available has been taken. Sporadic publication and record keeping on the Supreme Court website has limited the uniformity.]

First, even though the court is disposing such cases, it is not able to keep up with the inflow of new cases. Therefore, the overall pendency has remained stagnant or marginally increased. Second, the increase in the number of connected matters means that more cases have been tagged with the main matters pending before these courts.

Alternatively, it could mean that cases involving more connected matters are now being filed with the courts. The bottom line, the numbers will only continue to rise unless their disposal is prioritised.

Research done by the Vidhi Centre for Legal Policy, suggests that the big jump between the 2017-2018 might not be reflective of the actual increase in cases. It might merely reflect changes in record keeping practices. It also highlights an even larger problem – the Supreme Court might not even know how many ‘benches need to be constituted’. For instance, the Supreme Court data suggests that as of December 2021 there are 50 main matters, when in reality the number is close to 35.

There are two reasons for this dissonance.

First, a Constitution Bench could have decided on the questions of law but a decision on the merits, for the main and connected cases, might be pending.

Second, there is an incoherent understanding of what constitutes a ‘main case’ by the Supreme Court. While the Supreme Court case status might identify a particular one, the response to the RTI application might identify multiple others as distinct cases. Issues of tagging, re-tagging and cross-tagging of cases, also further complicates these numbers.

Therefore, the most immediate need is for the Supreme Court to conduct a thorough and targeted assessment of the number of cases pending before it and comprehensively identify the set of pending issues. Presently, there are no active benches hearing these matters. Benches either need to be constituted for the first time or afresh because the Judges hearing the case earlier have retired.

Why are these benches not being constituted?

Understandably, as the graph below identifies, cases before the constitution benches form only a miniscule component of cases pending before the Supreme Court.

Disposing of these cases can reduce the burden of the Court in three ways.

First, the research available on the Vidhi Centre for Legal Policy’s constitution bench tracker has identified the number of main and connected matters pending before the 5 Judge, 7 Judge and 9 Judge Benches

These numbers suggest that quite clearly, disposal of some main matters can lead to the disposal of a larger batch of cases.

Second, disposing of these cases will limit litigants who have been aggrieved but not agitated their rights from coming to the courts.

Third, since these cases involve substantial questions of law, it is likely that their disposal might dispose or expedite the disposal of other related cases.

For instance, the disposal of the Sabarimala case will have implications on other cases involving religious practices, such as Muslim women’s right to pray in mosques, the Parsi women’s right to enter a Fire Temple after having married a non-Parsi, and the practice by the Dawoodi Bohra community of female genital mutilation.

Therefore, purely in terms of efficient disposal of Supreme Court pendency, there is a compelling case to prioritise them.

At a more fundamental level, the question of whether such cases should be prioritised goes to the core of the role we intend the Supreme Court to play. Should it undertake the mandate of being a constitutional court and therefore dispose cases that involve substantial questions of law or dispose appeals?

A movement towards the former, even within the judiciary seems to suggest a promising shift. Given that such drastic structural changes, if any, take years, it will be upon the Chief Justices to determine the priorities of the court in the interim.

This article is the second of the four part series on Constitution Bench pendency. It was first published in Bar & Bench.