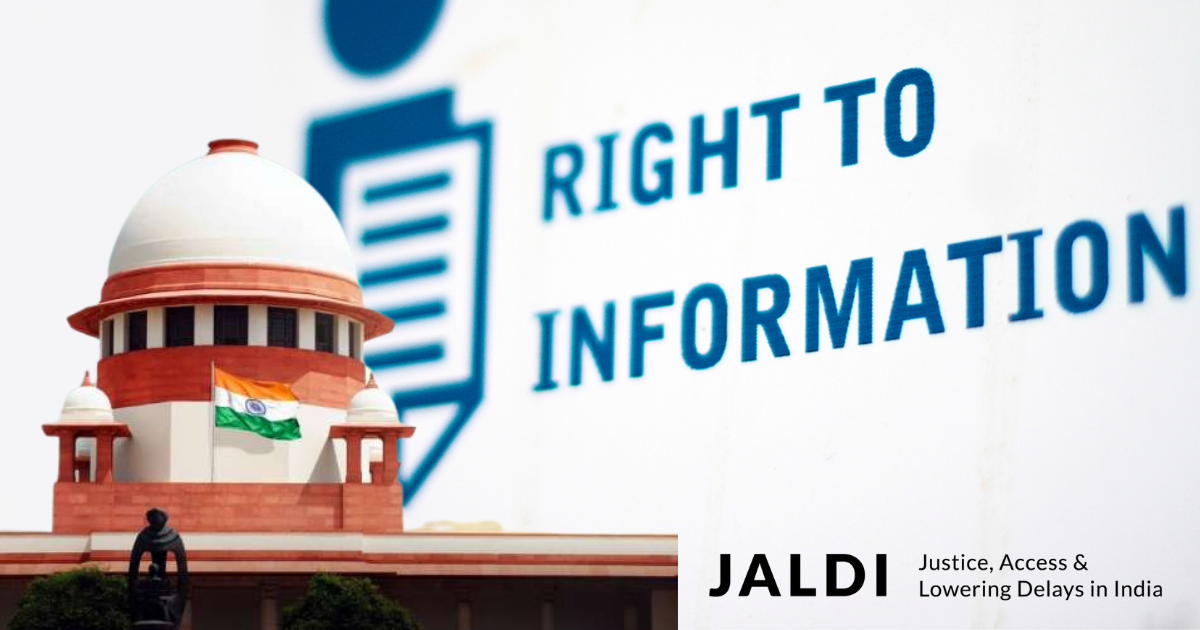 Introducing a Portal for Navigating High Courts & the RTI Act

The right to information of Indian citizens stems from Article 19 1(a) and Article 21 of the Constitution of India. In 1975, the Supreme Court ruled that the citizens have the ‘right to know’ and that the same is derived from the concept of freedom of speech. While the Supreme Court has delivered several similar judgments, it did little to help the citizens due to the lack of any legal framework which could be used to enforce this right. The Right to Information Act, 2005 (‘RTI Act’) is the first of its kind sunshine law in India which bestows on the general  public the right to demand information held by the State.

The RTI Act provides a mechanism for all citizens to obtain information from public authorities and also imposes a positive obligation on the authorities to publish information regarding their functioning. The Act, in its spirit, is intended to be a means for every citizen of the country, irrespective of their social or economical background, to demand information from the State.

While the RTI Act has been strengthened by the judiciary in its applications to several public authorities, the Courts have not been as stern in its application to themselves. The Courts have used their discretionary powers to frame RTI Rules that often complicate the process of filing RTI applications. Moreover, in Vidhi’s research, it emerged that Courts tend to strictly abide by these Rules rejecting applications on grounds which can only be seen as contradictory to the spirit of the Act.

In an earlier report, the JALDI (Justice, Access and Lowering Delays in India) team at Vidhi undertook a study of the rules and practices followed by various High Courts to understand their extent of compliance with the Act. It was found that the RTI Rules drafted by various High Courts govern not only the costs of filing and modes of payment for RTI Applications, they often prescribe mandatory formats that have to be followed by the applicants. Some of the practices include the Orissa High Court requiring the payment of Rs. 2 per 180 words of the copy of the information sought. Other arbitrary practices include the Bombay High Court requiring applicants to enclose self-addressed stamped envelopes with the RTI application and the Madras High Court requiring applicants to send Rs. 100 additionally when requesting copies of any document.

Following Vidhi’s report, the Delhi High Court, by a notification dated March 2, 2020, amended the Delhi High Court (Right to Information) Rules, 2006 to simplify the procedure prescribed in them. The Court amended the requirement of mandatory application format and reduced the number of grounds on which information can be denied. It can only be hoped that more High Courts will follow suit and take the necessary steps towards making the judiciary more transparent.

Recognising the difficulties faced by applicants in seeking information from the High Courts, the JALDI initiative at Vidhi has created a portal containing templates for filing RTI applications with all the High Courts in the country. The templates have been created keeping in mind the hurdles faced by Vidhi researchers while seeking information from the Courts and through extensive perusal of the High Court Rules. The RTI template for each state has been presented as a ready-to-use downloadable Word document. The portal also provides specific instructions for each High Court. This portal is an attempt to ensure that every citizen has a ready reckoner to enforce their right to information before the High Courts and to bring about greater transparency in the judiciary.