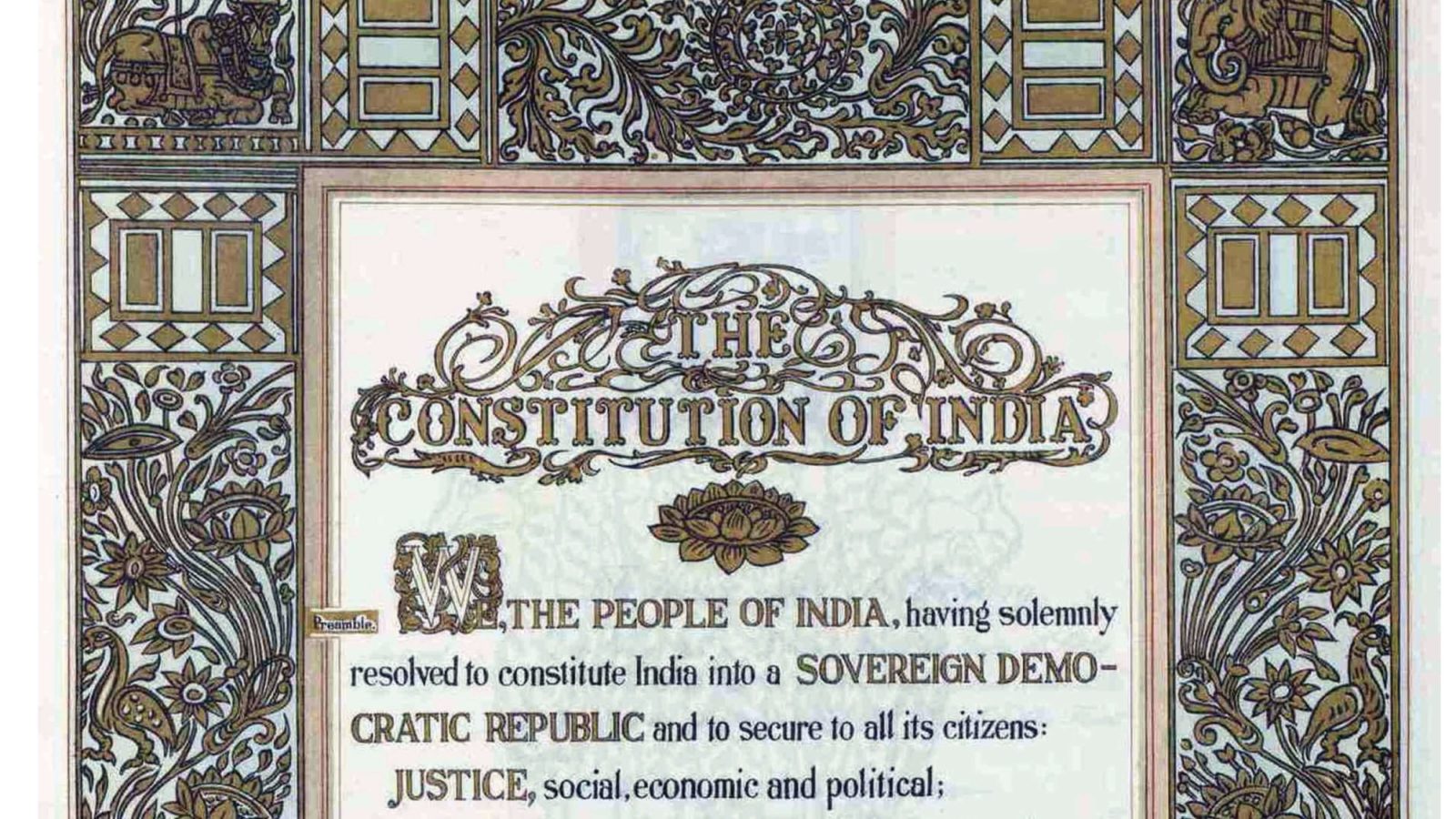 Introducing the Samvidhaan Fellows for 2020-21

Conceptualised by the Vidhi Centre for Legal Policy and supported by the Azim Premji Philanthropic Initiatives, the Samvidhaan Fellowship is a one year, full-time and paid Fellowship which has been designed with the objective of closing this ‘constitutional principles to policy’ gap, It will support six legal scholars to work sustainably on key issues of Indian Constitutional Law. The Fellows are lawyers with an interest in constitutional law, who will be working in different parts of India to promote constitutional law research at the grassroots level. The Fellows were selected through a rigorous process based on  their research proposals on the themes of Federalism, Minority Rights and Electoral Reforms.

We are delighted to announce the Samvidhaan Fellows for 2020-21:

Amulya is a graduate of NALSAR, Hyderabad and Stanford University. Between 2015 and 2017 she worked as a Graduate Fellow in the School of Policy and Governance at Azim Premji University in Bangalore where she assisted with teaching several courses for the masters programmes in development, public policy, and law. She also assisted with several research projects that applied interdisciplinary methods to the law in areas such as tribunalisation, crime victimisation surveys, appellate court workload, and legal aid in India . As a graduate student at Stanford, her research focussed on a narrative analysis of rape judgments delivered by the Supreme Court of India in the post independence years. Since returning to India she briefly taught at NALSAR Hyderabad as an Assistant Professor (Ad-hoc) teaching elective courses titled “Suffering” and ” Statistics for Lawyers”.

As a Samvidhaan Fellow, Amulya will write a book that analyses caste atrocities legislation and litigation through multi-disciplinary methods including archival work, narrative analysis of judgments, and interviews. The book will uncover the history of civil rights claims that have been at the heart of caste-atrocities cases. She hopes this will provide evidence that leads to  legal reform so that these cases are adjudicated in their proper context and the promise of Article 17- the abolition of untouchability – is fulfilled.

Padmini Baruah is a graduate student at the Fletcher School of Law and Diplomacy at Tufts University, where they focus on gender and comparative politics. They hold a law degree from the National Law School of India University, Bangalore. They have worked in the past for the Leir Institute for Human Security, MIT’s J-PAL, and McKinsey and Co.

As a Samvidhaan Fellow, their project will scrutinise the constitutionality of the Foreigners Tribunals in Assam and look deeper into the grounds for reform. It combines aspects of legal and empirical research. The former entails a closer look into whether the establishment and functioning of the Tribunals withstand the test of constitutional doctrines. This will be substantiated by ethnographic work from the field where they will conduct participatory research in the premises of the Tribunals as well as carry out semi-structured interviews with those whose citizenship has been legally contested.

Sumedha Ray Sarkar is an Assistant Professor at Tamil Nadu National Law University where she currently teaches Constitutional Law and Legal Methods. She is an alumna of both ILS Law College, and Campus Law Centre, University of Delhi, and has read for her Masters at Columbia Law School. Prior to teaching, Sumedha has worked as Research Assistant to Prof. (Dr.) Kamala Sankaran at the University of Delhi and served as law clerk to Hon’ble Justice S. Ravindra Bhat while he was at the Delhi High Court, and later to Hon’ble Justice R.F. Nariman at the Supreme Court of India. Her areas of interest include judicial review, legal interpretation, and empirical legal studies.

As a Samvidhaan Fellow, Sumedha will be tracing the connection between language, education and federalism by conducting a predictive, interpretative exercise on the constitutional permissibility of a link language and its implications for the linguistic federal structure of India. Given the historical trajectory of the language issue in India and the distribution of legislative powers in the Constitution, her project posits that a likely route for the link language is a Central law mandating its use as the medium of instruction, or its compulsory inclusion in the curriculum in primary education. She hopes for her project to contribute to an understanding of the constitutional ramifications of a link language within the unique federal design of India, and begin a more tangible, objective discussion on its legal feasibility.

Lalit Panda is a graduate of the Gujarat National Law University, Gandhinagar and has been working in the Public Law team at the Vidhi Centre for Legal Policy, New Delhi since 2017. Prior to joining Vidhi, he worked briefly as a Consultant with the 21st Law Commission of India. At Vidhi, he has worked in the broad areas of law and technology, regulation and constitutional law, providing legal and policy research on subjects such as data protection, higher education, election law, and fiscal federalism.

As a Samvidhaan Fellow, Lalit aims to conduct inter-disciplinary research into the equal protection guarantee in the Indian Constitution, examining a range of recent and long-standing controversies regarding the right to equality through the lens of Law & Economics. Applying transaction cost analysis as well as insights from other disciplines regarding the significance of uncertainty, he hopes to develop new methods of constitutional design and interpretation related to reasonable classification in laws, disparate impact, and the design of affirmative action programmes, amongst other such subjects.

Subhajit received an LLM in Constitutional and Administrative Law from Gujarat National Law University and a BA LLB from Sikkim University, where he earned a Silver Medal. He was an Assistant Professor of Law at Tamil Nadu National Law University, where he taught Administrative Law. He is a Fellow of the Royal Asiatic Society, Great Britain, and a member of the IUCN World Commission on Environmental Law, Switzerland. His areas of interest include Law and Society, Constitutional Law, and the Sikkim Himalaya.As a Samvidhaan Fellow, Subhajit intends to study and understand how the Constitution of India transformed Sikkim through the prism of Article 371F. Sikkim is a Special Category State of India having a distinct identity within the Union.  Article 371F displays the de jure asymmetric federalism of India. This study will reflect Sikkim’s constitutional democratic experience against India’s evolving constitutional and social environment since its absorption in 1975. Furthermore, the study will explore how to constitutionalize development in Sikkim while preserving, protecting, and defending the ethos of Article 371F in letter and spirit.

Afreen is a practising lawyer based out of Mumbai. She studied law from the Faculty of Law, Aligarh Muslim University and holds a masters degree in Access to Justice from Tata Institute of Social Sciences. She has worked on a spectrum of issues pertaining to human rights in the interiors of Jharkhand and West Bengal through her fellowship at the Centre for Social Justice, Ahmedabad. She then joined the Human Rights Law Network where she litigated full-time on human rights, criminal justice, and constitutional law.

As a Samvidhaan Fellow, she will study the effect of the Citizenship Amendment Act, 2019 on Muslims of India. The Project is aimed at developing legal techniques/methods of handling the impact of the CAA on the affected individuals and community, converting the ground level experiences into short write-ups/videos for creating awareness and dissemination of constitutional knowledge and finally understanding the constitutional issues involved in the context of the community’s experience and producing an academic work for publication. The project aims to inform citizenry, design policy interventions, and further lead to strategic litigation.

Watch a video on the Fellowship below: