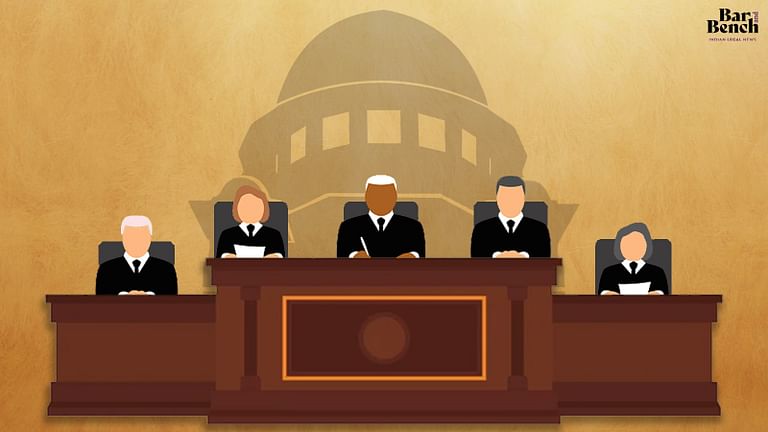 While the Court constituted an average of about 100 five-judge or larger benches a year in the 1960s, by the first decade of the 2000s this decreased to about nine a year

As is the case with many statistics published by the Indian judiciary, the information on Constitution Benches on the Supreme Court website is superficial and only shows half the picture. While the Court provides overall data on the number of Constitution cases and the connected matters, there is no information regarding the length for which these cases are pending and how this affects the many connected matters.

However, a closer look at the cases shows that some of these cases have been pending for years on end with no end in sight. The highest Bench currently being constituted by the Supreme Court is the nine-Judge Bench.

Arguably the cases pending before such Benches involve the most significant questions of law and will greatly impact the citizens of the country.

The 5 main cases pending before the nine-judge Benches of the Supreme Court have been pending for an average of 7,804 days, and these 5 cases affect the fate of 130 other connected matters.

Out of these, Property Owners Association v. State of Maharashtra (a significant case to determine the constitutional validity of Chapter VIII-A of the Maharashtra Housing and Area Development Act, 1976) has been pending for as many as 11,021 days.

The case of Mineral Area Development Authority etc. v. M/S Steel Authority of India, which has 80 matters connected with it, has been pending for 8,365 days. The case deals with challenge to the Bihar Coal Mining Area Development Authority (Amendment) Act, 1992 and the rules framed thereunder, for imposing additional cess and taxes on land revenue due from mineral-bearing lands. The below table shows the complete list of cases filed before nine-judge benches of the Supreme Court and the connected matters therein.

Similarly, the 5 seven-judge Bench cases pending before the Supreme Court have 57 connected matters and have been pending for a total of 28,680 days (average 5,736 days).

Out of this, the Special Leave Petition in the case of Arjun Flour Mills v. State of Orissa which deals with the question “whether or not the State Legislature can pass a law levying a surcharge on sales tax?” was filed on February 11, 1994 and the case has been pending for 10,230 days.

The case ofState of Punjab v. Davinder Singh was challenged before the Supreme Court on August 13, 2010 and has hence been pending before the Court for 4,203 days. This does not include the journey of the said case through the High Court. The case deals with the significant issue of sub-classification within reserved seats for Scheduled Castes in Punjab. The case further has 20 connected matters out of which 8 cases have been pending for over 14 years each.

Another such significant case is the case of Rojer Mathew v. South Indian Bank Limited that was last listed before the seven-judge bench on November 25, 2020. Pending before the Supreme Court since March 28, 2017 (1,784 days), the case has 18 connected matters and deals with the issue of classification of the Finance Act, 2017 as a Money Bill.

The oldest pending case before a Constitution Bench is the case of Central Board of Dawoodi Bohra Community v. State of Maharashtra which has been pending since February 28, 1986 (13,135 days). The case also has one tagged matter that has been pending for over 31 years.

The case of Ashok Kumar Jain v. Union of India which challenged the validity of the Constitution (79th Amendment) Act, 1999 providing reservation of seats for Scheduled Castes, Scheduled Tribes and the Anglo-Indian community, has been pending before a five-Judge Bench of the Supreme Court since July 10, 2000 (7,889 days).

Similarly, the case of Janhit Abhiyan v. Union of India has been pending since January 15, 2019. Similar to the previous case, this case challenges the constitutional validity of the Constitution (One Hundred and Third Amendment) Act, 2019, which empowers governments to provide reservations to economically weaker sections for admission to educational institutions and appointments in services to a maximum of 10 per cent. The case has as many as 46 tagged matters awaiting the verdict of the Court.

A study conducted by Nick Robinson stated that the number of Constitution Benches being constituted by the Supreme Court has drastically decreased over the decades. While the Court constituted an average of about 100 five-judge or larger benches a year in the 1960s, by the first decade of the 2000s this decreased to about nine a year. The above data shows not only a lack of Benches being constituted, also the lack of will to adjudicate these significant cases.

This article is the third of the four part series on Constitution Bench pendency. It was first published in Bar and Bench.