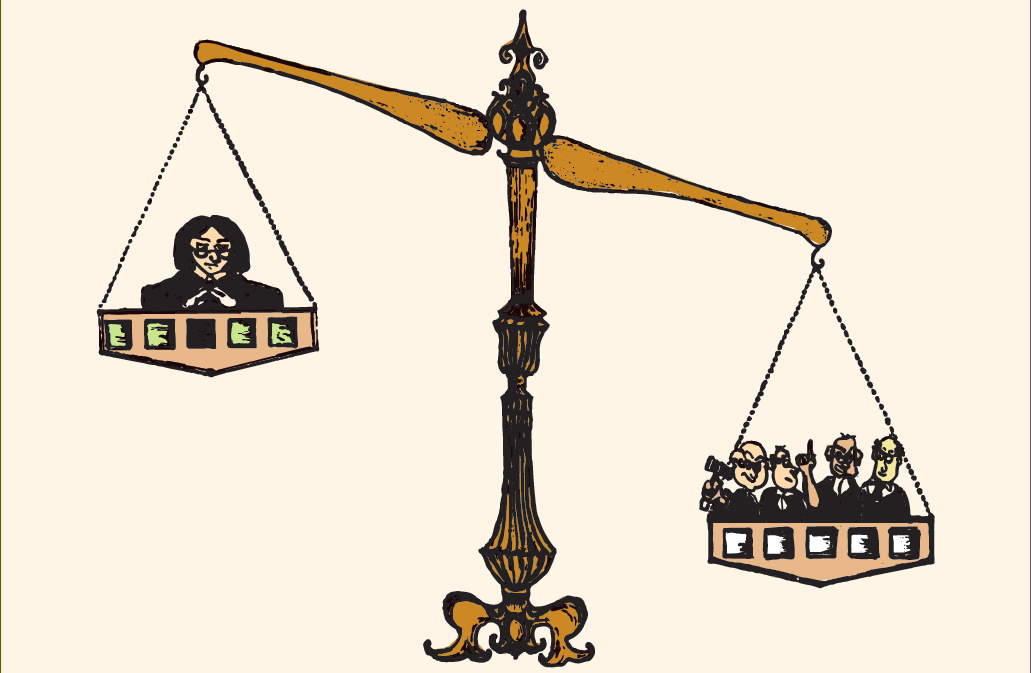 The question of judicial diversity has long featured in global discourse, encompassing demographic characteristics such as gender, race, ethnicity, religion, socio-economic background etc., as well as professional background. Arguments in favour of prioritising judicial diversity emphasise that it provides decision-making power to previously disenfranchised sections of society, and that a diverse bench is an essential component of a fair and impartial judiciary. Additionally, it has also been contended that a diversity of viewpoints on the bench enhances the courts’ representativeness and democratic legitimacy.

In India, however, the discourse around judicial reforms has largely revolved around case delays, inadequacies in capacity and other systemic problems with the judiciary. The report ‘Tilting the Scales’ highlights the state of gender representation in our judiciary. It documents how the presence of women judges not only provides for equal opportunities for women in the legal profession but also tends to reduce barriers to women’s access to justice.

Since its inception in 1950, the Supreme Court of India has only seen six women judges. Across India’s 24 High Courts, slightly over 10% judges are women, with not even a single woman judge in eight High Courts. The unavailability of data for this makes it tougher to overcome the problem – percentages for the Supreme Court and High Courts can be calculated from public data but for lower courts, lack of data hinders the process of reform. This report aims to fill this gap by providing state and district wise data on the gender composition of lower bodies.

District wise names and designations of 15,806 judges of the lower judiciary were extracted from sources across e-courts, websites and government offices. This data, available for 651 districts, was manually verified and then analysed. 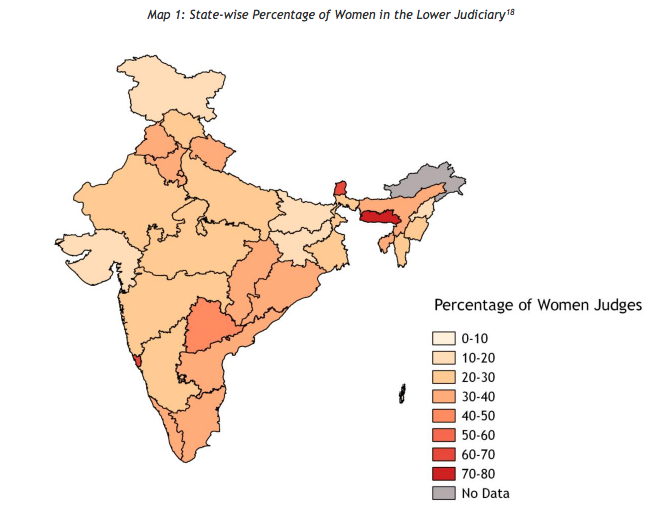 As is evident from Table 1, the overall representation of women in the lower judiciary is extremely poor. Further, an analysis of state-wise data revealed that the three smaller states of Goa, Meghalaya and Sikkim have representation exceeding 60%.

Another relevant factor to study while comparing states is provisions for reservations. Though there is no reservation for women in the higher judiciary, a number of states have provided quotas for women in the lower judiciary. States such as Andhra Pradesh, Assam, Bihar, Chhattisgarh, Jharkhand, Karnataka, Odisha, Rajasthan, Tamil Nadu, Telangana and Uttarakhand provide for reservation which ranges between 30%-35% of the total seats, for which recruitment is done through direct appointment.

Our findings reveal stark differences in gender composition between these tiers, which may be caused by several factors. One factor certainly is the number of female lower court judges in previous years. Apart from this, however, differences in the gender balance between these tiers may also hint at potential bias in promotional processes. Given that men and women are equally meritorious, in the absence of discrimination, one would assume that the proportion of women judges will remain the same from the lowest to the higher tiers, for any given batch of judicial officers. The data collected for this brief also shows a near-uniform trend of the proportion of women judges decreasing as one moves up the tiers of the lower judiciary.

3. Factors for the gender imbalance:

The data showed a moderate correlation between sex ratio and representation of women in the lower judiciary. This means that where sex ratio increases, there is a moderate increase in the female representation of judges in the lower judiciary. Apart from this, other factors that are conventionally highlighted as reasons for the gender imbalance in the judiciary include the disproportionately low number of women lawyers and the challenges they face on entering litigation – which is traditionally a stronghold of male lawyers.

Sexual harassment and the lack of supportive infrastructure, from toilets to maternity leave, also contribute to a high attrition rate amongst women lawyers, with many preferring to join the corporate sector instead. Several prominent lawyers and judges have also described outright bias against women in appointment and promotion processes.

1. Regular compilation of data: The lack of data hinders research efforts on this subject thus limiting the scope for advocating reforms. The appropriate governmental authority, whether this be the Union Law Ministry or the concerned High Court, must monitor and make data on diversity in the lower judiciary publicly available. The lack of data on this metric is indicative of the importance attached to it, as well as being a contributor to the low attention it receives in discourse.

2. Accommodating diversity concerns in discourse on appointments: There is an urgent need to expand judicial discourse so it can also accommodate concerns over diversity and equitable social composition. Despite slow improvements, there have been some encouraging trends – In 2017, for the first time, all four High Courts of Delhi, Calcutta, Bombay and Madras were headed by women Chief Justices. Sustained efforts from Executive, Legislative and Judiciary along with civil society demands, can go a long way in effecting change.

For a spreadsheet containing the district-wise gender composition of the lower judiciary in India, click here.

Download the full report ‘Tilting the Scale: Gender Imbalance in the Lower Judiciary’.