Urban Local Bodies in Karnataka, and in many other parts of India, have limited ability to raise finances to support infrastructure development. The limited ability stems from the lack of empowerment in decision making, which eventually leads to excessive reliance on the State Government for guidance and financial support. Vidhi’s report on the ‘Financing of Urban Local Bodies in Karnataka’ identifies the legal issues that restrict an urban local body from becoming truly financially independent. The report identifies various sources for revenue for five larger urban local bodies in Karnataka: Bengaluru, Mangaluru, Shivamogga, Mysuru and Davangere.

The report studies the financial performance of the above mentioned five Municipal Corporations to identify policy trends, and accordingly suggests reforms to the governing legislation, the Karnataka Municipal Corporations Act, 1976. Vidhi’s report suggests reforms to improve existing sources of revenue, strengthen financial accountability and identify new sources of revenue to completely meet the expenses of these urban local bodies.

An urban local body has two primary sources of revenue: grant and non-grant. Grant-based revenue are those given to it by the State Government as per the recommendations of the State Finance Commission or as part of certain schemes. Non-grant revenue are those which are independently raised by the urban local body as part of the taxes and fees it is empowered to levy.

To identify policy trends, Vidhi studied the financial balance sheets of the urban local bodies for a period of three years (2011,2012 and 2013) and compared grants to non-grant revenue. For the purposes of studying the non-grant revenue, the report studied the following taxes and charges:

2. Advertisement tax(now subsumed under the Goods and Services Tax).

Based on the financial comparison and emerging policy trends, the relevant taxing provisions under the Karnataka Municipal Corporations Act, 1976, judicial precedents and best practices were studied to recommend suitable amendments under the various state legislations.

Findings on finances of urban local bodies and recommendations 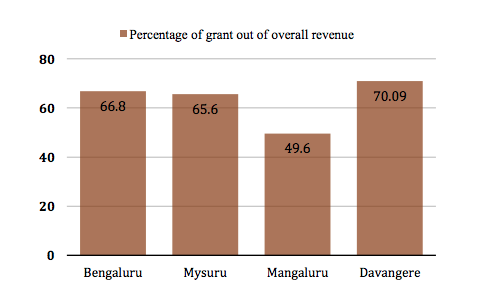 The above graph indicates the grant to non-grant ratio in the five selected Municipal Corporations.  Davangere received the highest amount of grant from the State Government (70.09%) over the period of three years and Mangaluru received the least (49.6.%)

Property tax, an important source of an urban local body’s own revenue, comprised only 25-30% of the overall revenue of the selected five Municipal Corporations, whereas the potential for collection of property tax in all the five cities can be in the range of 60-70%.  To improve the process of collecting property tax , the following reforms are suggested:

1. The Central Valuation Committee (CVC), which determines the guidance value for the calculation of property tax, has numerous shortcomings in its governing framework. The Committee does not consult with urban local bodies for determining the value and does not have definitions on its governing rules for different types of properties. Therefore amendments to the Central Valuation Committee Rules, 2001 have been suggested.

3. To avoid misuse of the self-assessment scheme for the payment of property tax, amendments to Karnataka Municipal Corporation Act, 1976 is suggested to levy appropriate penalty for misuse.

4. To ensure more number of properties are taxed, enactment of dedicated land titling legislation or reforms to the Karnataka Government’s urban property ownership record has been suggested.

None of the selected Municipal Corporations were unable to meet even 50% of the total expenses incurred in providing water supply to houses and industries. This was largely due to inefficient pricing of water by the Municipal Corporations. Therefore, to improve the same establishing a water pricing regulatory authority has been suggested to ensure an independent assessment and determination of water pricing.

To ensure urban local bodies in the State are efficiently dealing with its finances, the State Government should develops a debt limitation policy for the bodies to ensure that it spends and borrows within a defined financial limit.

Rethinking Urban Planning and Governance in Light of COVID-19