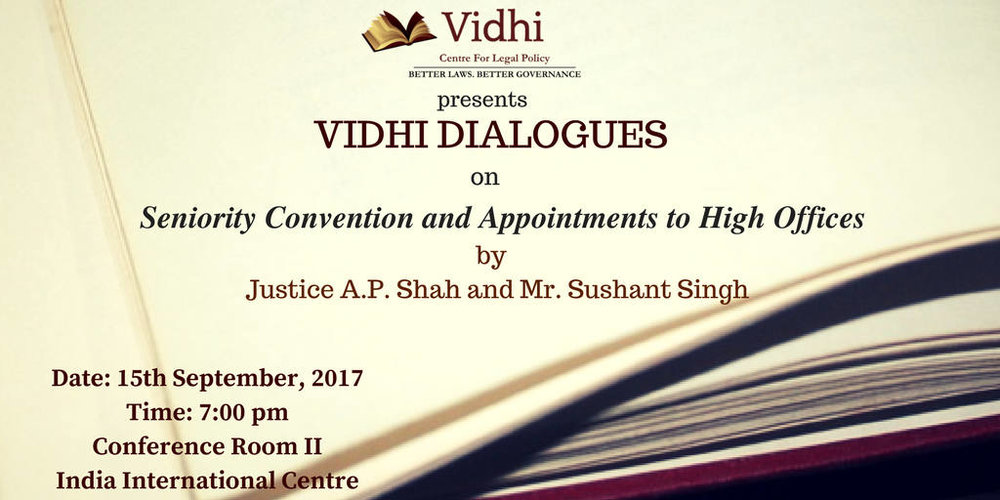 With the retirement of Justice Khehar at the end of August, Justice Dipak Misra has been appointed the next Chief Justice of India. A Memorandum of Procedure on the appointment of judges, however, is still to be finalised. General Bipin Rawat was also named the Chief of Army Staff a few months ago, superseding two senior army officers. These developments give rise to questions about whether the seniority convention as an objective method of appointment should continue, or should be replaced with appointment based on merit.

In this edition of Vidhi Dialogues, Justice A.P. Shah and Mr. Sushant Singh will discuss their views on ‘Seniority Convention and Appointments to High Offices’ and whether a better selection mechanism can be developed for these appointments.

Justice A.P. Shah is the Chairman of the 20th Law Commission of India, and has served as the Chief Justice of the Delhi High Court.

Mr. Sushant Singh is the Associate Editor at the Indian Express. He has earlier served with the Indian Army and as a peacekeeper with the United Nations.

The dialogue is scheduled for 15th September, at 7 p.m., at the India International Centre, Conference Room II.

For admission to the event, we will prioritise guests who have registered. You can register for the event here.