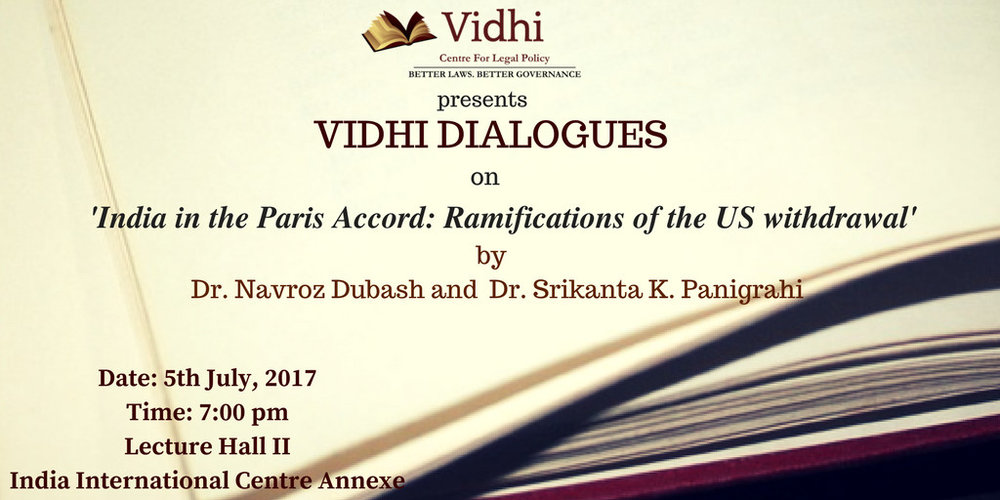 The withdrawal of the United States from the Paris Accord, last month, has cast a shadow on the overall functionality of this Agreement. The implications of the US withdrawal are two-fold: first, the US is one of the three top polluters along with China and India, responsible for highest carbon emission levels and its withdrawal is a dent on the global unity that was embedded in the Paris Accord. Secondly, the US was also envisioned to be a major contributor to the Green Climate Fund, established under the Accord, and its withdrawal may impede the growth of this fund.

The Vidhi Dialogue will explore the implications of the US withdrawal on India and its obligations under the Paris Accord. For this edition, we are happy to present two distinguished environmentalists, Dr Navroz Dubash and Dr Srikanta K. Panigrahi, who will be presenting their insights on the theme of this dialogue.

Dr Navroz Dubash is a senior fellow at CPR and coordinator of the Initiative on Climate, Energy, and Environment. His research and policy interests include climate change policy and governance, the political economy of energy and water, the regulatory state in the developing world and the role of civil society in global environmental governance. In 2015 he was conferred the 12th T N Khoshoo Memorial Award in recognition of the impact of his work on Indian climate change policy and the international discourse on global climate governance.

Dr Srikanta K. Panigrahi is the Director General of Carbon Minus, and was instrumental in initiating the Kyoto Protocol in India. Presently, he sits as a member on the Prime Minister’s National Mission on Strategic Knowledge for Climate Change, which has been set up under the National Action Plan on Climate Change. He was also a member of the Working Group which prepared the National Action Plan for Operationalising Clean Development Mechanism in India.

The dialogue is scheduled for July 5th, at 7 p.m., at the India International Centre (Annexe.) Lecture Hall II.

For admission to the event, we will prioritise guests who have registered. You can register here.