The productivity of the Indian Parliament has a direct impact on the quality of law-making. Debates in the Parliament are often criticised for being marked by constant disruptions that lead to reduced quality of debates on issues of importance. Much has been written about the perpetually disrupted Parliament of India, the strain it puts on the taxpayers’ money, and the ensuing legislative paralysis which stultifies governance.

Vidhi’s report ‘Disruptions in the Indian Parliament’ is an empirical analysis of the reasons that propel Members of Parliament (MPs) to cause disruptions, and why they have remained immune to popular criticism. The study makes use of empirical research and comparative experiences, with the ultimate aim of inviting wider public engagement on the conceptualisation of legitimate dissent in a parliamentary democracy.

Two parliamentary sessions have been studied in the report – the Winter Session of 2013-14 and the Monsoon Session of 2015 in both Houses of Parliament.

Key aspects of the report

First, it demonstrates what the causes for disruptions are. Delineation of such causes is a critical precursor to any reform measure directed at reducing incidents of disruption.

Second, it argues that disruptions are both key constitutive factors as well as manifestations of a transformed Parliament — its primary nature has changed from being the apex legislative body in India to a forum for grandstanding on matters of public importance. Disruptions are an effective method for such grandstanding; equally, the changed nature of Parliament makes disruptions acceptable.

A comparative assessment of the two parliamentary sessions yielded the findings given below. 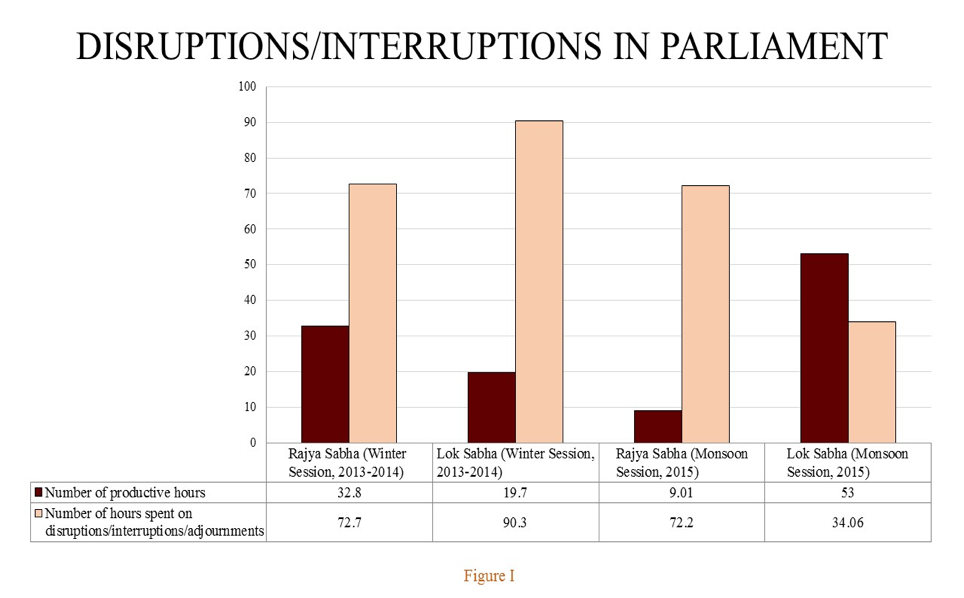 This report also conducted a sessional analysis of the number of hours spent on Private Members’ Bills, Government Bills, and other business. To gain a deeper understanding of the nature of deliberations in Parliament, various devices afforded by the Lok Sabha and Rajya Sabha Rules for initiating a discussion, and for interjecting during ongoing discussions were also analysed. The various devices available to MPs include motions, questions, raising matters of public interest, and points of order. Some of the key takeaways from this analysis were:

• The time spent on productive discussions constituted less than 40% of the total time in three out of four sittings of either House of Parliament. The remaining time appears to have been largely spent on disruptions.

• Of the total number of productive hours in both Sessions, the maximum amount of time appears to have been spent on the introduction, consideration and the passage of motions on the floor of the House. Only in the 2015 Monsoon Session of the Rajya Sabha did motions take up less than an hour of the total productive time of the Session.

• Structural reforms associated with composition of the Rajya Sabha, application of the law on anti-defection, inner-party democracy, discussions led by parties in opposition, and Prime Minister’s questions;

• Substantive reforms associated with permission to intervene, and the expression of a divergent view, naming of disruptive MPs by the Speaker, reforms to the Ethics Committee, and the reduction of salaries for suspended members; and

• Measures for popular accountability pertaining to stopping of live telecast when disruptions become excessive, and formulation of a Parliamentary Productivity Index.

The substantive reform measures are meant to ensure that each MP gets ample opportunities to intervene and express her opinion in Parliament, without feeling the need to disrupt or being affected by disruptions. The reform recommendations also address the need for definitive changes in the disciplinary rules of the Lok Sabha and the Rajya Sabha for ensuring greater productivity in parliamentary sessions. At the same time, measures to promote popular accountability which could perhaps deter some MPs from engaging in disruptions, are also proposed in the Report.

Download the full report – ‘Disruptions in the Indian Parliament’

Rajya Sabha, the Safety Valve of Indian Federalism | The Wire